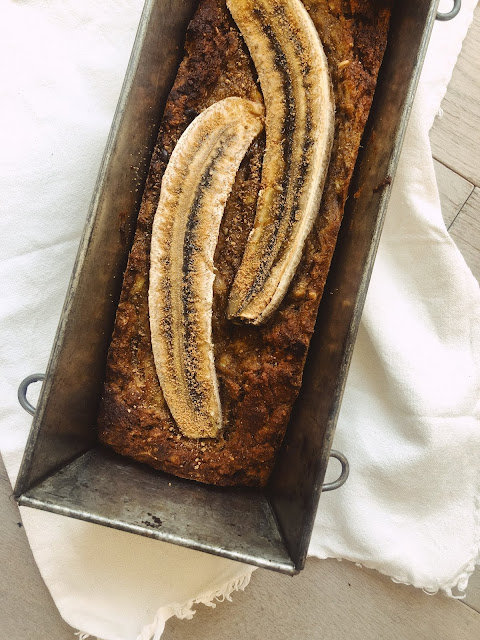 It's official. I'm all out of ideas. I don't know how it's happened, but two of the four recipes I've posted in the last three (gasp) years have been for banana bread. How embarrassing.

The strangest part is I never even really liked banana bread all that much. Sure, it set my mind percolating, ruminating on those steamy South Carolina mornings when my classmates would gleefully tote loaves their mothers had baked into school. But really, I always found it kind of unremarkable.

These days, however, I do enjoy a slice or two, toasted up until crisp and fragrant, slathered with lashings of salted butter. And maybe a schmear of raw honey. Yes, it's basic. Yes, it's been "done." But you know what? That's alright with me. I'll take delicious over cool, any day.

In a large bowl, whisk together mashed bananas, peanut butter, vanilla and egg yolks. In the bowl of a stand mixer fitted with the whisk attachment, whisk egg whites until stiff peaks form. While these are whisking, add the coconut flour, baking soda, cinnamon and salt to the banana mixture. Stir to combine. Carefully fold in the whipped egg whites. Fold in cacao nibs gently, careful not to overmix, lest your egg whites deflate.

Add batter to prepared loaf pan. Arrange banana slices on the top as you like. Bake for 30-35 minutes, until fragrant and knife inserted in the center comes out clean. Let cool on a wire rack.