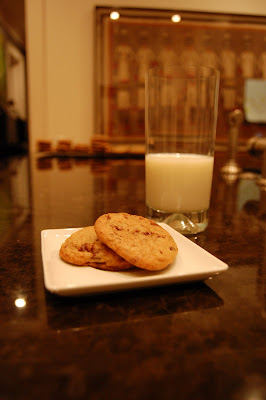 So this blog has definitely been dominated by chocolate. However, that is not to say that is a bad thing....definitely not a bad thing. I was thinking that I would do something with a Fall-ish fruit next, so let me know what you all think.
I began by creaming room temperature butter with light brown sugar and white sugar. I added two eggs that were also at room temperature one at a time to the creamed butter and beat the mixture until the eggs were fully incorporated. As the eggs were mixing into the butter and sugar, I whisked flour and baking soda together. I then added this to the mixture in the mixing bowl.
Next, I chopped 14 oz. of good dark chocolate into small chunks to add to the dough. Luckily, I had just enough, not an ounce to spare. I added this to the cookie dough and folded it in. Of course I tasted the dough, but something seemed a little off. The dough was strangely runny, but not runny enough for me to be truly concerned. I read through the recipe once more to ensure that I had done everything right; boy was I glad I did. I had left out one cup of flour!
I added the missing cup of flour, divided the dough into three parts, and rolled each section of dough into a log. I wrapped the logs in Saran Wrap and put them into the refrigerator to chill for one hour.
Once the logs were hard enough to slice easily, I sliced them into one inch pieces. It was like homemade slice and bake! I had just run out of parchment paper, so I had to butter the baking sheets instead. As I cut the slices, I had a pinch of dough here and there. I knew it needed something, but I couldn't put my finger on what was missing. Then I realized that there was no salt! I checked the recipe once again, but it seemed that David had intended them to be this way.
I proceeded to bake them in a 350 degree oven for ten minutes, turning the sheets halfway through. The cookies were beautiful and incredible. I do think that I will add a pinch of salt the next time I make them, as it would just enhance the already great flavor of these cookies. They were perfect with an nice, cold glass of milk!
Posted by Hayley Daen at 8:57 PM