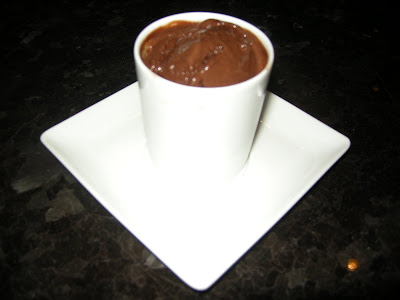 For my next recipe, I decided to try something completely different from what I had done before. That is not to say that I had never made ice cream before, but I had never tried a gelato recipe, particularly one from this book. I had made a cinnamon ice cream from David Lebovitz's other cookbook The Perfect Scoop before, so I knew this would be delicious.
Before school yesterday morning, I decided that I would go ahead and make the custard, and I would churn the ice cream after school. I couldn't help sneaking a spoonful or two as it churned, and boy was it delicious. I made sure, as I have discovered from past experience, that the ice cream bowl had been in the freezer for at least three days. During previous ice cream-churning endeavors, I have found that any less time in the freezer resulted in a runny, if still delicious, tasting cold soup.
I used skim milk for all the milk the recipe called for, and it still tasted incredible to me. I think that anything richer would have been overwhelming. The gelato turned out smooth, glossy, and a beautifully dark brown. The espresso cup I served this in was the perfect sized cup in which to enjoy this treat.


Whisk cocoa with 1 cup milk in a saucepan. Bring to a boil over moderate heat. Remove from heat and stir in chocolate until it has completely melted. In another saucepan, warm remaining milk with sugar. Whisk together egg yolks in a bowl and gradually pour in some of the warmed milk, whisking constantly. Pour warmed egg mixture back into saucepan. Cook over low heat, stirring constantly, until custard thickens enough to coat the back of a spoon. Strain custard into chocolate mixture. Chill thoroughly and freeze in an ice cream maker.
Posted by Hayley Daen at 5:32 AM